Thoughts from Bryn's Mommy on her Retirement


This past Saturday was Bryn's official retirement from performing and I want to share my side of this journey if you'll indulge me. The GARF cast was so incredibly kind to us, and we owe a debt of gratitude for the good wishes, hugs, and the gingersnaps/turkey leg-shaped stuffy toy.

We had no idea what we were getting into when I brought home that 5mo old Jack Russell in a greyhound-sized body, but Anne and I packed her up and took her to the faire the very next day, hoping we would at least wear her out.

What we actually did was create for her a home away from home, where everyone adored her. No one said she was too big or loud. No one worried that she was in the way, or that she would break something. Everyone there quickly became part of Bryn's Faire Family, and they loved her and made a fuss over her - and that is something every rehomed dog needs, I think.

Don't get me wrong, Bryn knows that we adore her and that we would do anything for her. She knows that she is home and will never be given up again. She knows that even when she chews up the oven mitt or flips over her bowl like it's a table in a bar, we will always be there. But I think it was a new thing for her to meet people that sometimes, quite literally fell to their knees in front of her, hands either outstretched and trembling or pressed against their mouths in sheer disbelief that she was real.

I get that way sometimes too if I'm honest. I was looking at her yesterday and thinking of all the hands that wound their way down her back, fingers tangling in her fur as faces softened and eyes smiled right along in wonder and gratitude that they got to know her...and I was feeling indulgently lucky that I got to sit there on the sofa with her or have her nose nudge under my elbow while I'm driving. I am irreparably hers.

And while I'm not sure where my faire journey will lead me next, I know that it will be with a bit less stress because I won't be worried about her...is it too hot for her? Are her legs getting stiff? Will she forget her training and nip at someone? Is all of this too stressful on her elderly body?

But as I was walking her out to the car Saturday afternoon, my heart soared and shattered into pieces. I overheard patrons as we passed and, for once, did not stop to greet them. "That's an Irish Wolfhound!" "Those dogs are amazing." "Such magical hounds!"

As much as I wanted to acknowledge that last one, I couldn't because it was impossible to remain in character and not be Bryn's human who frequently becomes overwhelmed with how incredibly fast the last eight years have flown by...

Thank you, my Bryndled Beastie, for all the times you tried to chew through my seatbelt on the way to Faire, and for all the chai lattes that you knocked out of my hand as we wandered the lanes. Thank you for the food I had to replace for patrons after you snatched it off the tables. Thank you for the raised ears and BOOFS at the jousting horses. Thank you for making me interesting, and for letting me show you off to hundreds of thousands of patrons at four Faires in three states.

Thank you. I promise to let you nap as long as you like now. You've earned it, Brynka-Boo, a thousand times over.

This weekend (well, Saturday) will be Bryn's last day at faire and while she has no idea, I'm sure...well, Mommy has some feelings. There will be more pictures next week, but for now please enjoy these pictures of Bryn's 8 years as a Rennie Hound.

I hope she won't miss it too much in retirement and she can help Ciaragh get ready to take her place next Spring at GARF. Maybe.

Back to the Faire...with a side of PTSD for Mommy

So this past weekend was the opening one for the Georgia Renaissance Festival. Anne and I headed down to work with her bloodhound Finn (whom I must have called Bo a million times) and my Bryn. I hadn't originally planned to take her, as I am reducing my appearances at Faire with HOEF until I have another keen Rennie hound that isn't into her bonus time. We're working on Ciaragh.

I was anxious all last week for all kinds of reasons. Will my garb fit? Have I forgotten how to do GARF? Will Bryn be okay at faire/for a long car ride/in a hotel room with a dog she really doesn't know? Things that were rote back in 2019 are now new and difficult and daunting. For example, I had everything packed save my overdress which was in the dryer when I started to load the car. My garb would have looked hilarious without the rest of my dress! The drive down was uneventful - Bryn slept for most of it. Our accommodation seemed fine at first, but turned out to be a nightmare of the not enough towels/shower gel dispenser falling off the shower wall/a kitchenette with no chairs for the table and no cutlery/an AC unit that sounded like a plane coming in for a landing variety. But there was a bed and a roof and we could make do.

Saturday morning I loaded Bryn up and we headed to Faire. And I was fine, really fine...until we got off the interstate and headed down that road that I drove up and down for days back in 2019, looking for any sign of my Ciaragh. My throat tightened and my mouth went dry as I saw the parking lot entrance ahead, and thought of all the times I'd driven in and out of there, knowing that I was leaving her behind to go get sleep. I was tearing up as I rode down the driveway to the backstage area where we were to park...where I sat for hours in my car with the tailgate open, hoping that she would just appear out of the trees, hop into the back, and settle in with a sigh that said she was ready to go home.

It was hard to see people who, when I last was with them, were telling me how sorry they were that she was missing and that they would keep an eye out for her. I saw the joust arena where she became so anxious and the fence that she pulled me face first into before breaking free. But Bryn wasn't running. Bryn was tired, and hot, but she stayed with me and we made it back to the hotel together.

And now I've done it...and I'm so grateful to all the cast and crew at GARF that helped and looked for her and loved me through it. But I'm also thankful to the patrons who made a point to ask if Bryn was the wolfhound that had gone missing and then were overjoyed to hear that Ciaragh was home and healthy and safe.

Faire-mly is real. Rennies are some of the best people on the earth. Onward and upward to Celtic Weekend!

Today I heard the very sad news that my Bryn's brother, Barley, left for the Bridge. I hope he was met by his "big" brother Harley, our precious Heather Burns, and all of the majestic wolfhounds waiting in the mist.
In honor of this majestic boy, here is an excerpt from Bryn's book, Clobberpaws, from Bryn's first meeting with her brother at the Carolina Renaissance Festival. We will see you again, big boy - now watch over your mum and dad because they miss you so much, and keep an eye on your little sister here. She has grown into the name Clobberpaws many times over, and I'm so grateful to have had time to spend with her big brother.

“I didn’t know I was a wolfhound till today, Barley. I just thought I was a greyhound like Daisy who was built wrong. I thought I deserved the name the greyhounds call me.” She hung her head.

“Clobberpaws,” Bryn whispered. Barley was quiet for a long time, and then Bryn noticed that he seemed to be holding his breath. “Are you all right?”

The large male wolfhound burst out with a deep, rumbling laugh that made Bryn smile in spite of herself. “Clobberpaws? Really?” he managed in between heaving gasps and more laughter. “You’re not even a big wolfhound, Bryn! What if your paws were the size of mine?”

Bryn stared at Barley. “But I don’t like that they make fun of me,” she whined.

“Oh, Bryn, wear that name as a badge of honor,” Barley replied, still chuckling. “When those thin-skinned lightweights get in trouble, we have to step in and take care of them because that’s what we do.” He paused a moment as the humans stopped to pick up something that had fallen down and took advantage of the moment to swipe one of his own huge paws past his cheek, satisfying an itch.

“I did hear Mommy say that ancient Wolfhounds were the dogs of war…but is that what that means?” Bryn asked, eyes wide with wonder.

“Yep. Some of them could pull a man off a horse,” Barley said, his chest swelling with pride. “So Clobberpaws is pretty accurate, I suppose.”

They walked the rest of the way to their cars in silence as Bryn mulled over what he had said. Too soon, it seemed, Auntie Tamara and Uncle Marc were loading Barley into the car and getting ready to leave. “I will see you again, won’t I?” Bryn called as Barley stuck his head out the open car window.

“Of course you will, little sister,” he replied. “Be kind to that greyhound sister of yours. She’s probably as unsure of you as you are of her.”

“Maybe.” Bryn scowled a moment and then beamed a wolfish grin at her brother. “Love you, Barley!” she called out.

“Backatcha,” he said, winking at her just before pulling his massive shaggy head back inside the car as Auntie Tamara rolled up the car window.

Bryn positively floated to the car with Mommy. She had a brother who thought she was normal. NORMAL! Not Clobberpaws. She was a wolfhound, and that was all right. In fact, that was just perfect.

In Which Col. Pickle is Jailed

A Note from Bryn and Ciaragh's Mommy 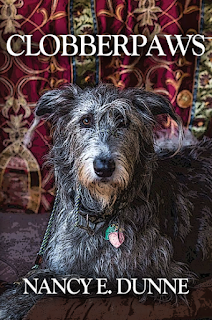 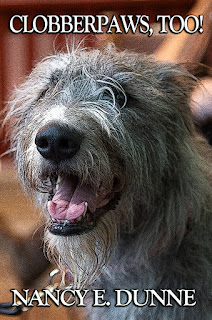 I want to take a second to thank everyone that purchased an autographed copy of Bryn and Ciaragh's books during the BBH Virtual Vendor Showcase at the beginning of last month. As a result of your generosity, I was able to make a sizeable donation to the Irish Wolfhound Rescue of the Mid South. This money will specifically go to the Heather Burns Memorial Fund for Veteran Hounds, to help place and care for the older and more medically fragile Irish Wolfhounds that are often harder to place when they come into rescue. Céad míle go raibh maith agat!
Posted by Nancy E. Dunne at 11:37 No comments: